Lately I’ve been thinking a lot about how much competition drives people. Would you describe yourself as personally competitive? How are you viewing competition ?

One of the biggest blessings of my life has been to have a brother who was just two grades ahead growing up, as well as neighbors a few years older than me too. We were far enough apart that we always had separate friends and played on separate teams, yet close enough in age that it became natural for me to play against them and their friends every time they came over to our house. I never played against the kids my age, I simply wanted to play with “the big kids.” Eventually, that notion bled onto most parks, courts and fields too.

Whether it was basketball, baseball, football or soccer, I grew up rarely competing against the kids in my grade. I was constantly playing against kids who were older than me. And truthfully, I was completely physically overmatched. They were bigger, stronger and sometimes faster too.

But the more I played against the big kids, the more quickly my skills and toughness had to evolve. Until one day, I realized that although I wasn’t the best player on most courts I walked onto, I was certainly the best player for my age.

Without realizing it, by seeing my competition as the older kids rather than those in my peer set, my game elevated to a level I couldn’t have reached otherwise.

This approach has since been ingrained into my psyche, and I highly encourage others to adopt a similar mindset. Your competition is not your peer set, it’s those two levels above you. It’s the older kids on the next court up the street.

Every time you reach a new height, look at those in the distance to try to figure out how you can be in their shoes one day. 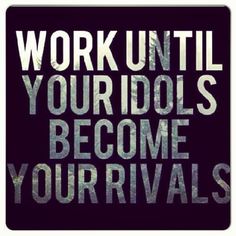 This notion is captured in the quote above, which says to “Work until your idols become your rivals.” Fortunately I work in the for-purpose sector, where there’s a collaborative mindset amongst leaders of great companies and organizations that try to help one another rise to solve society’s most pressing humanitarian issues. I don’t see anyone as a rival in the space, only those whose impact I admire and hope to one day emulate. Those individuals are a reminder that the older kids will always be playing on some park, and it’s our collective duties to work so hard that one day we can play on the same court alongside them.