People often wonder, “Who should I connect with to advance my personal or business objectives?”

We often focus our efforts on building strong ties where we perceive the greatest value, but science suggest that surprisingly the value lies in your weak and dormant ties. I recently observed this when my wife fractured her toe while we were traveling internationally. I posted this photo on Instagram about her injury, and within 5 minutes I received texts from two different people. One is an old college friend I hadn’t spoken to in months who’s now a doctor and immediately offered a second opinion on her x-rays.

This happened before my own family saw the post, and got me thinking about the phenomenon that details the strong power of weak ties. 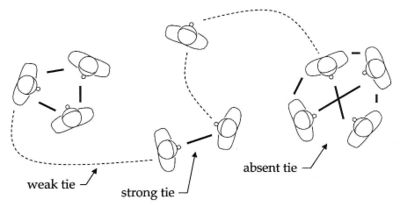 As I dug more into this though, the science suggested the greatest value is in the dormant ties.

My friend Adam Grant’s brilliant book, Give and Take, explains this in detail. Kim Keating references this here by explaining, “Sociologist Mark Granovetter found in a classic study that you’re 58% more likely to find a job by cultivating your weak ties rather than your strong ones. Why? Both weak and dormant ties offer more novel information than strong ties. They travel in different circles and are connected to entirely different people – unlike strong ties, who tend to travel in the same circles as you do.”

So next time you’re in a jam or perhaps looking for your next job, recognize that the true power is in connecting with your weak and dormant ties. Although our gut tells us, “I let that friendship go for a reason,” the science says you should reach back out and reconnect.