There’s a graphic circulating around the internet that includes a quote from Elon Musk. He says, “My proceeds from the PayPal acquisition were $180 million. I put $100 million in SpaceX, $70m in Tesla, and $10m in Solar City. I had to borrow money for rent.” 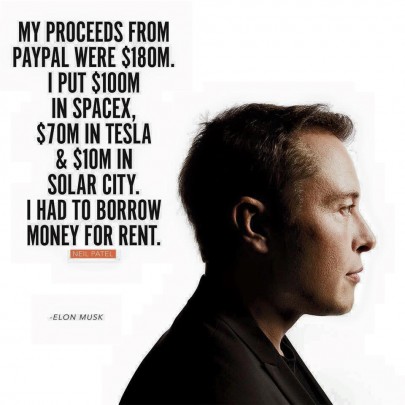 I’ve noticed it gaining a lot of traction on Instagram accounts lately, and it seems that what is being celebrated is the all-in risk taking of an iconic entrepreneur. But I believe there’s something more nuanced at play here, which is a fascination and admiration of his ability to manage the fear of failure that holds so many people back from aggressively pursuing their dreams.

Over the past decade I’ve spent a lot of time with incredible leaders, and I’ve noticed that they all invest in three core practices that allow them to thrive where others would dare not go. Here are the three methods through which great leaders overcome the fear of failure.

When I think back to one of the most critical moments in the creation of Pencils of Promise, there was an essential decision that seemed illogical at the time. If I’d stayed at Bain & Company just four more months, I would have received a large bonus that would have enabled me to live comfortably for at least 4-6 months without worrying about making rent. Yet I purposely left those funds on the table. Why would I do this?

The answer was that I knew that if I cut myself off from that financial assurance, I would have hustled my ass off to make sure PoP grew rapidly enough for me to justify a full-time salary. More important though, the organization would have to greatly increase its positive impact on the world via revenue growth to enable this, which meant that my own well being was tied to the well being of the students we sought to serve.

By cutting off your lifelines, you effectively triple down on your need to create success in your core venture of focus. For some this is scary, but for those in the know it is essential.

Once again, this may seem counterintuitive. If you don’t want to fail, why wouldn’t you give yourself an easy target? The answer is in the acknowledgement that even if you fall just short of a crazy ambitious goal, you’ve still done something incredible by almost all normal standards.

There were a lot of people who set out to break the 4-minute mile barrier before it had ever been done, and even though they fell short, I guarantee they were some of the most impressive runners in the world to even consider that mark a possibility.

3. Keep Your Eyes on the Horizon

The reality of any ambitious undertaking is that you will have many successes and failures along the way. Additionally, the areas of real skill and cognitive growth will always be in the failures. However if you focus too much on them, the emotional weight of those losses will crush your momentum and ability to reach the big end goal.

The key is to keep your eyes on the prize, always looking off into the distance (for more detail on this you can read “The Most Important Lesson I Learned in My 20’s“) at the core goal without getting distracted by the minor wins and losses along the way.

As long as you calibrate towards the major goals you’ve set for yourself, you’ll find yourself seeking the hard challenges necessary to get there, and embracing the minor failures on your way to major success.

If you have any additional lessons on the road to overcoming fear of failure please share them below.